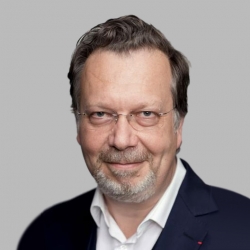 Philippe SALLE is a graduate of the École des Mines of Paris (France) and holds an MBA from the Kellogg Graduate School of Management, Northwestern University (Chicago, USA).

Philippe SALLE began his career at Total in Indonesia before joining Accenture in 1990. He then joined McKinsey in 1995 and became senior manager in 1998. In 1999, he joined the Vedior group (which later became Randstad, a company listed on Euronext Amsterdam). He became Chairman and CEO of Vedior France in 2002; in 2003, he became a member of theManaging Board of Vedior NV and was then appointed President for South Europe in 2006 (France, Spain, Italy and Switzerland). From 2007 to 2011, he served first as Deputy CEO and then Chairman and CEO of the Geoservices group (sold to Schlumberger in 2010, listed on the New York Stock Exchange), a technological company operating in the petroleum industry with 7,000 associates in 52 countries. From 2011 to 2015, he was Chairman and CEO of the Altran group. He then became Chairman and CEO of Elior where he remained until October 31, 2017. Since December 1, 2017, he has been Head of the Emeria group (formerly Foncia). He is a Knight of the French National Order of Merit and of the Legion of Honor and Commander of the Order of Merit of the Italian Republic.