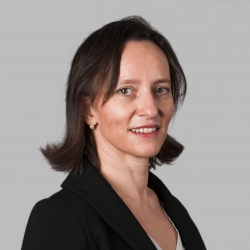 Anne France LACLIDE-DROUIN is a graduate from the Institut Commercial of Nancy (ICN) and Mannheim University. She also holds a Diplôme d’études supérieures comptables et financières.

Anne France LACLIDE-DROUIN began her career at PricewaterhouseCoopers before occupying various positions in the Financial division of international groups in different sectors, such as the distribution sector, where she acquired international experience. In 2001, she became Financial Director of Guilbert, then Staples, AS Watson and GrandVision. Anne France LACLIDE-DROUIN has been CFO of Oberthur Technologies, comprising the responsibility of the Financial and Legal Functions of the group, from 2013 to 2017 and of Consolis Holding SAS and a member of the Executive Committee of Consolis Group SAS, from 2017 to 2020. She is now Group CFO of RATP Dev (since January 1, 2021).