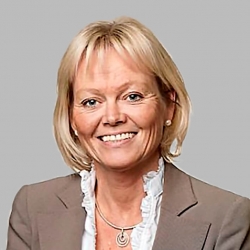 Expiry of the current term of office: 2024

Heidi PETERSEN holds an M. Sc. (cand. scient. degree) from the Norwegian University of Science and Technology in Trondheim, Department of Chemistry and Mathematics.

Heidi PETERSEN started her career as a research assistant at the Norwegian University of Science and Technology in Trondheim in 1983. She was employed at Kvaerner Oil & Gas from 1988 where she worked as an engineer, project manager and departmental manager engaged in offshore and land-based industrial assignments. She served as maintenance supervisor of the Gullfaks C platform for two years from 1995 to 1997. She was appointed head of Kvaerner Oil & Gas AS in Sandefjord in 1997, where she served as Vice President until 2000. In 2000, she headed a management buyout that led to the startup of Future Engineering AS and served as its Managing Director from 2000 to 2004. In 2004, she sold the Company to Rambøll and served after that as Managing Director of Rambøll Oil & Gas from 2004 to 2007. Heidi PETERSEN is an independent businesswoman, with 30 years of experience in the oil and offshore industry. She owns Future Technology AS, a leading consultancy and technology company located in Sandefjord and Oslo offering consulting engineering and construction solutions , notably in the oil and gas industry.