CGG congratulates Fabien Allo, Jean-Philippe Coulon, Jean-Luc Formento and Romain Reboul on being selected to receive the Society of Exploration Geophysicists’ (SEG) Award for Best Paper in The Leading Edge in 2021 for their paper ‘Characterization of a carbonate geothermal reservoir using rock-physics-guided deep neural networks’. The paper was co-authored with Laure Capar, Mathieu Darnet, Benoit Issautier, Stephane Marc and Alexandre Stopin from BRGM and published in October 2021.

The paper describes how a combination of machine learning and rock physics helped leverage legacy seismic and well data for the characterization of a carbonate geothermal reservoir located in the Dogger Formation northeast of Paris, France. A large amount of synthetic data, representative of the geological knowledge of the region, was used to train deep neural networks capable of translating seismic amplitudes directly into key reservoir rock properties. The networks were successfully applied to a set of vintage post-stack seismic data. Results from the study highlighted a set of porous and permeable layers encountered at existing geothermal wells that will be used to guide the location and design of future geothermal wells in the area.

The global shift in focus to exploration for geothermal resources in sedimentary basins will see an increased demand in the successful repurposing of technology and data originally developed and acquired for oil and gas exploration. As an example, in France, more than 100,000 km of vintage seismic data is available over the most prospective areas for geothermal heat production. The significance of the technology described extends far beyond this specific case study as it can be applied to any seismic reservoir characterization project for a range of different industry applications. It is especially effective for exploration cases where well data is limited or even absent, making machine learning a realistic alternative to conventional seismic inversion methods and a more efficient option to fully leverage legacy seismic data before considering the acquisition of brand-new data.

Sylvie Gentier, Director of Energy Transition Research Program, BRGM, said: “The Paris basin has five large aquifers, including the Dogger which has the largest number of low-energy geothermal operations in the world, with 46 operations providing geothermal energy to about 6-7 % of the region’s total population of 11 million people. To meet the Paris Agreement goals, more geothermal development is required but geologically favorable areas are becoming scarce. As a consequence, new projects face increasing subsurface risks, as evidenced by recent project failures. The development and application of new technologies to de-risk and support future geothermal developments is therefore of paramount importance. The work presented in this paper is a first successful step in this direction and a prime example of the value of leveraging oil & gas know-how and exploration technologies to build new de-risking tools for the geothermal industry.”

Dave Priestley, VP, Energy Transition & Environment, CGG, said: “The work described in this paper is just one example of how CGG is bringing its cutting-edge geoscience capabilities to energy transition challenges – in this case combining both geothermal and seismic subject matter expertise and technology. In general, our Geothermal Science experts draw on industry-leading expertise from across a range of geoscience disciplines, and a unique Earth Data library, to better understand and de-risk geothermal resource exploration and development. With a track record of over 150 targeted geothermal projects and two global resource assessments over the last two decades, we provide valuable intelligence to our clients for resource discovery and assessment, and reservoir characterization, production optimization and monitoring.” 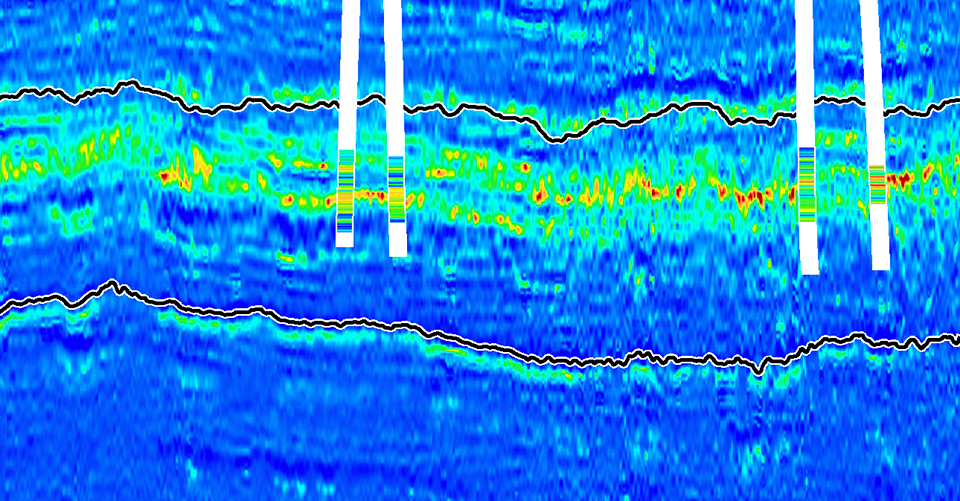 Effective porosity section through the study area, with well overlays, obtained by combining the total porosity and clay volume estimated with deep neural networks directly from post-stack seismic amplitudes. The extent of layers with high connected porosity encountered at existing wells is revealed in the top part of the reservoir interval, indicated in red and orange.